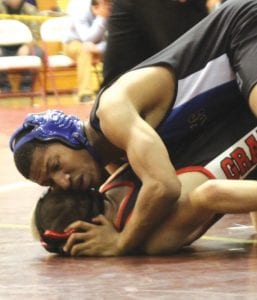 A shorthanded Saginaw team faced a strong Carman-Ainsworth squad Saturday only to watch the boys increase their record to 8-0 led by Jordan Bair’s 278. The girls improved their record to 7-1 with all-around team bowling that included Shamonica Simon (258), Kassidy Lord (213-222), Kenzey Lord (201), and Yakira Hughes (192).

On Friday, the Cavs traveled to Stardust Lanes in Saginaw to take on Bay City Western. The boys remained undefeated, while the girls suffered their first loss to undefeated Western. The girls were led by Yakira Hughes (221) and Shamonica Simon (213).

Last Wednesday, the teams traveled across town to Grand Blanc Lanes for their match against Flint Powers. Both teams improved their records to 6-0. Shamonica Simon rolled 216-204 and Bernadette Gruber a 204.

The Cavs will host the Cavalier Invitational Eliminator Singles Championship on Sunday at Grand Blanc Lanes, followed by the makeup match Tuesday at Monitor Lanes in Bay City against Flint Northwestern. Wednesday the teams are at Candlelite Lanes in Bridgeport against Saginaw Heritage. – L.P.

Carman-Ainsworth finished third in the Allen Park Invitational last Saturday, going 3-1 in its pool and then beating Dearborn Fordson, 56-24, in a crossover with the other pool of teams. The Cavaliers whipped Warren Summit Academy, 75-4, Unified Team B, 68-6, and Monroe, 46-31, in the pool competition. No individual results were available.

On Jan. 22, the Cavaliers shut out Powers Catholic, 71-0, in a Saginaw Valley League dual. Carman-Ainsworth will wrestle in the SVL meet this Saturday at Davison. — D.N.