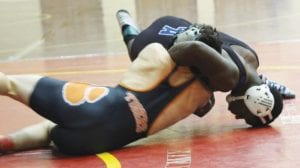 BOWLING: Carman-Ainsworth finished the season last Saturday against Saginaw Heritage. The boys lost their first match of the season, but DeQuincy Adams rolled a 300, the first perfect game bowled in the Saginaw Valley Conference. The boys finished at 10-1 winning the league title. The girls finished with a 9-2 record, beating Heritage, 25-5, led by Shamonica Simon with 217-266.

All four girls – Kenzey Lord, Kassidy Lord, Bernardette Gruber, Shamonica Simon – made it through the qualifying round. Kenzey Lord advanced to the top 10, while Simon placed third.

The girls bowled at the Eisenhower Open Doubles Tournament on Feb. 9 at Imperial Lanes in Clinton Twp. Kenzey and Kassidy Lord qualified eighth and finished in second place, losing to Tecumseh.

The girls lost for just the second time this season against Davison on Feb. 8. Kassidy Lord rolled a 244 and Simon a 209. – L.P.

WRESTLING: Three Carman-Ainsworth wrestlers finished second in the Div. 1 individual regional at Oxford last Saturday and qualified for the state finals Feb. 27-March 1 at The Palace of Auburn Hills.

Four other Cavaliers fell short of qualifying among the top four placers. D’Mario Blue at 160 and Herbie Keskes at 189 both lost their first bouts of the day, stayed alive with victories in their next matches, then saw their day end in the consolation semifinals.

SWIMMING: Carman-Ainsworth/Flushing is at the Saginaw Valley meet at SVSU Saturday. – B.P.