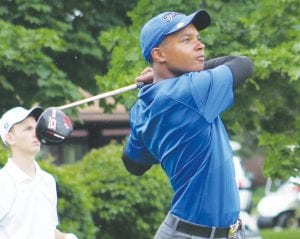 Haywood Petty shot 88 in the Wolfpack Invitational on Tuesday.

GOLF: The Cavaliers finished 10th in the Wolfpack Invitational in Bay City on Tuesday, shooting 436. Haywood Petty led the Cavs with an 88.

Carman-Ainsworth was supposed to play in the Saginaw Valley League season ending tournament last Thursday, but that event was postponed by rain and will be made up today. – D.N.

The Carman-Ainsworth girls’ lacrosse season came to an end on Monday at Flint Powers Catholic as the Lady Cavaliers dropped the first-round match up to their Saginaw Vallley League foes, 15-4. The Chargers outpaced the Cavs, 12-1, in the opening half and both teams totaled three goals apiece in the final frame. — B.P.

Alexis Thurber scored four goals to lead Carman-Ainsworth over Flint Southwestern, 8-0, Monday. The Cavs led 6-0 at the half and tacked on two insurance goals in the second. Mariel Hernandez and Jordan Marsh each had a goal, Holley Taylor had an assist, Arianna Vantine had a goal and an assist and Tesconie Watts scored once.

Last Friday, Carman-Ainsworth lost to Clio, 4-0. Clio scored three goals in the first half and added one in the second.