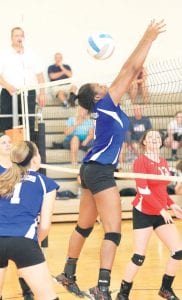 Carman-Ainsworth’s Deja Lester goes up for the block at the Linden tournament last Saturday.

The Lady Cavaliers placed 13th at the Charger Tournament hosted by Flint Powers at the Flint Golf Club on Monday. Davison won the title and Davison’s Gabby Stephens was low medalist. Davison carded 344, Midland Dow was second with 365 and Port Huron Northern was third with 369. Lapeer was fourth in its first season in the Saginaw Valley League with 378, Flushing had 379 and is no longer in the SVL entering the Flint Metro League this season and Fenton had 384. Powers carded 390, Linden 396, Freeland 420, Lansing Catholic 424, Saginaw Heritage 430, Swartz Creek 437, Carman-Ainsworth 441, Bay City Central 466, Bay City Western 470, Midland 481 and Mt. Pleasant 493.

At the Lapeer Lightning Summer Tune-up last Friday, Carman- Ainsworth fired a 506. Against Holly on Aug. 21, Carman- Ainsworth was led by Mikaila Garrison with a 48, Elena Gleason had 51 and Taylor Jarnigin finished with a round of 55. — L.P. 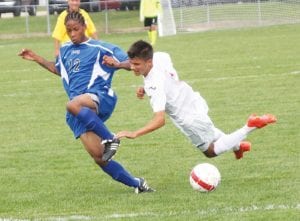 Carman-Ainsworth’s Jason Haynes (12) and Swartz Creek’s Trenton Pifer get tangled up while chasing the ball in Monday’s game at Swartz Creek.

On the road on Monday, Carman-Ainsworth out-shot Swartz Creek 11-4 on its way to winning 2-0. Making nine saves was the Dragons’ Britton Sacharski.

Carman-Ainsworth went 2-1 at Monday’s Durand Quad, falling just short of the host Railroaders, who went 3-0 on the day. Kearsley was 1-2 and Flint Southwestern went 0-3 overall.

The tournament began with pool play, and unfortunately for the Cavs, that is as far as they would get. Carman-Ainsworth fell in its match with Swartz Creek, 25-20, 26-24, and also dropped a contest with New Lothrop, 25-18, 25-15.

The Cavaliers will travel to New Lothrop today. — B.P.