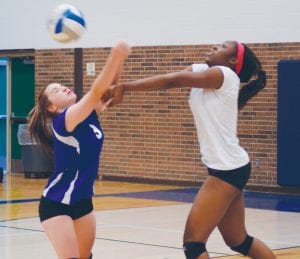 Carman-Ainsworth’s Korbin Bradon (9) and Deja Lester team up for a dig.

The Cavalier boys finished 19th in the team standings with 486 points at the Greater Flint Cross Country Championships last Thursday. Clio was first with 55, Davison was second with 83 and Grand Blanc was third with 101.

The Lady Cavaliers fired 495 at last Wednesday’s final league meet. Midland Dow won the meet with 328, Davison was second with 338 and Flint Powers third with 355. Lapeer was fourth with 380. – L.P.

In their final home game of the 2014 regular season on Oct. 6, Carman- Ainsworth tied Goodrich 1-1 on Monday. Kyce Zaiter scored first for the Cavs on the pass from Shukairy, which the Martians countered after halftime off the foot of Duncan Tetmeyer with help from Aaron Saunders. In net, Tyler Springer had four saves for the Cavs and Goodrich goalie Kyle Neuman made six defensive stops.

In a Saginaw Valley League-South matchup at Davison on Oct. 1, the Cavs won 3-1 on a pair of goals by Leon Bell. Ahmad Alzahabi also scored, adding an assist each were Isaac Young, Wisdom Pittman and Shukairy and making seven saves was goalie Ray Macko.

Carman-Ainsworth is at Linden for a non-conference game today. — M.S.

The Lady Cavaliers suffered a setback on Tuesday, hosting Midland Dow in a Saginaw Valley League crossover dual that saw the Chargers come out on top in three sets, 25-12, 27-25, 25-15.

Carman-Ainsworth travels to the Saline Tournament on Saturday. — B.P.