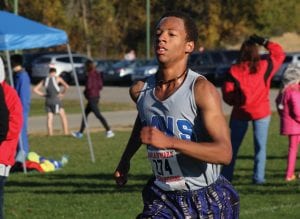 The Cavalier boys finished ninth with 258 points at the Kayla O’Mara Invitational Saturday. Holly was first with 42, Heritage was second with 53, Davison was third with 63.

In their final game of the 2014 varsity soccer regular season, Carman- Ainsworth lost at Flint Metro League rival Linden 5-2 last Thursday. The Cavs actually took a 1-0 lead into halftime after Leon Bell scored with help from Uthman Shukairy, only to give up five goals in a row in the second half. Bell also connected for the final goal of the game on the Ahmad Alzahabi assist and Tyler Springer made 13 saves.

A trip to Saginaw Nouvel on Oct. 7 ended in a 6-1 victory for the Cavaliers. Ahmad Alzahabi led the offensive charge with two goals and an assist, Kyce Zaiter scored twice and Leon Bell and Yahya Abdelhay added a goal and an assist each. Uthman Shukairy also had three assists and charting an assist was Tyler Springer, who along with Ray Macko, managed a save a piece. — M.S.

The Cavaliers are at Swartz Creek today. — B.P.