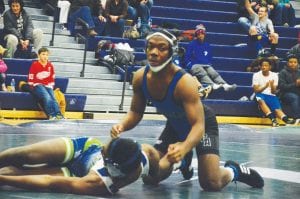 Derrien Vaughn is currently ranked eighth in Michigan at his weight class for Div. 1.

The Cavaliers swim at Lapeer in a Saginaw Valley League meet tomorrow. — K.W.

Led by Derrien Vaughn, the eighthranked wrestler in the state for Div. 1 at 135 lbs., the Cavaliers’ varsity squad was able to claim third place last Saturday at the Allen Park Invitational. Finishing first was Caro and Monroe was second. The Cavaliers went 4-1 with victories over Fordson, Saint Mary’s Summit Academy and Gibraltar Carlson in pool play.

The squad lost to Monroe prior to competing in the dual for third place, as well.

“After starting out on a good roll we lost to a tough Monroe team. They are really good and performed well,” said assistant coach Jake Weissend “The way the guys bounced back from that to finish the meet in third place after a tough loss was really impressive.”

“The team persevered through some tough matches. The guys Arthur Hill and Saginaw have are tough,” said Weissend. “They were long, drawnout matches going all the way into the third (period). The way the guys conditioning held up really stood out to me.”

The Cavaliers next take the mat in Mt. Pleasant at the SVL meet on Saturday.

“I’m expecting really tough matches. The Valley has always been a tough tournament,” said Weissend. “I’m expecting to have a few guys reach the finals and have some tough matches there, and some of our other guys are going to surprise some people.” — M.S.