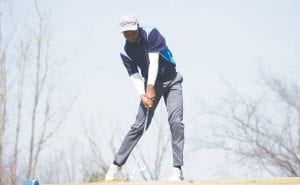 FLINT — With teams from all over the area gathering for a shot at claiming the event title and local bragging rights, the Carman-Ainsworth varsity baseball team began the annual Greater Flint Tournament at Broome Park in Genesee County last Friday. In the opener the Cavaliers lost to Lapeer 8-1 as Logan Walker allowed just one run on four hits in six innings pitched for the Lightning and Parker Fisher went 3-for-4 with one RBI.

Carman-Ainsworth then bounced back to defeat Swartz Creek in the second game of the tourney last Saturday 5-1 as Cooper Betencourt allowed a run on eight hits to earn the complete-game decision. Jawanza Edwards went 2-for-4 with a run.

FNW forfeited second game because it did not have enough pitchers.

The Cavaliers finished 10th in the second Saginaw Valley League jamboree of the season Monday, shooting 406 at The PohlCat in Mount Pleasant. Haywood Petty led Carman-Ainsworth with a 91, Tyson Fields shot 99, Noah Vanderhyde 105, Kaden Rytlewski 111 and Aaron Floyd 112. Powers Catholic was first with a 327. — D.N.

Kristin Hawk went 3-for-3 with three RBI in the nightcap and Haskins was 2-for-2 with two RBI. Taylor Jarnigin notched her first varsity triple and Katie Hubbard was in the circle in the finale.

The Lady Cavaliers put forth their most dominant performance of the season at Flint Northwestern on Thursday, routing the Lady Wildcats in two mercy-shortened games, 18-0, 18-0. McDaniels, Black and Hawk all racked up two hits apiece in the opener. Haley Fyfe and Ally Dittenber accomplished the same feat in the nightcap.

Carman-Ainsworth will play in the third SVL jamboree next Tuesday. – D.N.