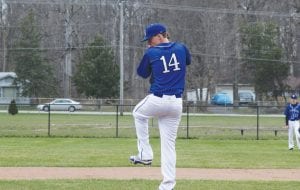 Carman-Ainsworth’s Jerome Austin glances to first base to check the runner before throwing his pitch.

In the second game of the Mt. Morris Invitational last Saturday, the Carman- Ainsworth varsity baseball team went up against a familiar face in Flint Metro League rival Kearsley, only to end up falling 10-0 in five innings.

Aaron Gagnon was 1-for-2 and Austin Yost at 1-for-3 charting the only hits for the game.

Having allowed nine runs in the initial two innings and another in the fifth, Spencer Fiewig also chipped in by giving up one earned run on three walks and no hits in one inning pitched in addition to going 0-for-2 at the plate.

In the opening game Carman- Ainsworth lost to Clio 4-0 as Trent Green went 1-for-1 and Austin Jerome checked in at 1-for-2. Also going 1-for- 2 was Jawanza Edwards and giving a 1-for-3 performance was Yost, Ryan Macko and Leon Bell. 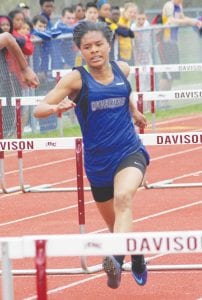 Carman-Ainsworth’s Harmany Williams charges toward the next hurdle in the 100-meter event.

In one of their most dominant performances of the season, the Carman- Ainsworth girls’ soccer team thumped Flint Northwestern at home on Tuesday, 11-0.

“So pleased that the scoring in today’s game showed a team effort,” said coach Jessyca Mathews. “To have eight players be able to score and five girls with assists means that they understand the value in passing and uplifting each other. There was no selfish action on the field. Everyone was looking to support and set each other up for the right opportunities. This was a very positive step in our season.”

The Lady Cavaliers took a Saginaw Valley League-South loss at home last Wednesday to Lapeer, 8-0. Carman- Ainsworth only trailed by two at the half, but a six-goal surge by the Lightning in the second half closed the game.

The Cavaliers were at Flint Powers Catholic on Wednesday, following VIEW deadlines, and will be back in action on Friday against Clio. — B.P.

The Lady Cavaliers took a pair of non-conference losses last Thursday at Brandon, 7-0 and 15-0. Madison Cox, Brianna Haskins and Jessica Smith each registered a pair of hits in the opener.

“We had great base running with steals and a double delayed steal and a beautiful third to first double play,” said coach Joy Roe. “In the second game, we couldn’t really get started.”

Due to inclement weather and field conditions, Monday’s twinbill against Bay City Western was canceled, as was Tuesday’s doubleheader against Holly.

The Cavaliers will return to the diamond tonight at Davison. — B.P.