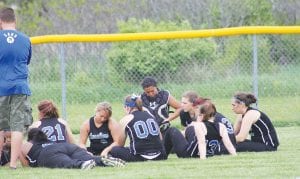 The looks on their faces say it all after the Carman-Ainsworth softball team lost 10-0, 16-1 against Lapeer at Lapeer on Monday. Lapeer clinched the Saginaw Valley League title with the win.

In the first doubleheader of a 10-game home stand to end the regular season, Carman-Ainsworth defeated Saginaw Valley League-South and Genesee County rival Davison 6-4 in game one last Thursday. The story for the Cavs in this one was Austin Jerome earning the complete-game win after allowing three earned runs on 10 hits and two walks with two strikeouts.

Trent Green also came through at 1-for-3 with a RBI and a run.

Haywood Petty tied for eighth place with a 78 to lead Carman-Ainsworth in the Saginaw Valley League championship tournament May 13 at the Fortress in Frankenmuth. Tyson Fields shot 87, Noah Vanderhyde 101, Aaron Floyd 103 and Kaden Rytlewski 106 as the Cavaliers totaled 369 to finish 10th.

Against Lapeer on the road on Monday, the Cavaliers had a tough time stopping the Saginaw Valley League champions in a pair of losses, 10-0 and 16-1.

“We had a few hits in the first game and four solid hits in the second game,” said coach Joy Roe.

Last Friday against Flushing, the Cavaliers swept their former league rivals, 3-2 and 12-7.

The Lady Cavs traveled to Davison for a Saginaw Valley League-South doubleheader last Thursday and fell to the Cardinals in both contests, 10-1 and 4-1.

“We had some issues in the first game,” added Roe. “Only a few line drive hits. We had errors in the outfield that Davison capitalized well on. In the second game, we lost 4-1. There were exciting diving catches from Morgan Sheerer in left field, a beautiful double play at third from Sarah Thurston, a hit to the fence from Madison Cox and great steals from Jada Black.”