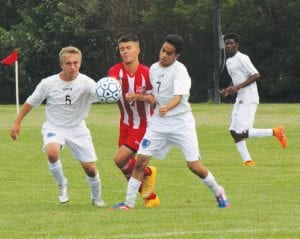 Carman-Ainsworth’s Lucas Shoffer (5) and Yazeed Abdel-Hay sandwich Swartz Creek’s Trenton Pifer as he attempts to take control of the ball at home on Monday.

Taylor Jarnigin shot 92 and Mikaila Garrison 96 to lead the Cavaliers in the 22nd annual Charger Invitational on Monday at Flint Golf Club. Alanna Gleason added 109 and Madysen League 114 as Carman-Ainsworth totaled 411 to finish 12th in the 19-team field and sixth in the Saginaw Valley League preseason tournament being played within the invitational. Midland Dow won the tournament with 345 and Cranbrook-Kingswood was second with 359. – D.N.

In their initial home game of 2015, the Cavaliers fell to Flint Metro League and Genesee County rival Swartz Creek on Monday 5-0.

“Our defensive front, even though we gave up five goals, they played their hearts out. We’ve got to figure out our midfield and get more production out of those guys,” said Coach Jay Witham. “We need to be able to possess the ball so our defense isn’t getting jammed 24/7. Our biggest problems are effort, energy, heart and having a little bit of pride. Right now we’re not gelling as a team. We’ve got some people working hard.”

“I thought we played together well as a team and out-hustled the other team,” said Swartz Creek coach DeMieko Smith. “My defense is just really, really strong. They work well together. On defense, we’ve got the smallest guy on the field, Garrett Bauserman, who’s about five-foot, but plays like he’s seven-foot. He’s a really good, smart player. His brother (Justin Bauserman) played a good game, as well.” — M.S.

“We had some struggles we weren’t anticipating, and we’ll work on those struggles in practice to make sure we improve in those areas,” coach Barb Hurand said. “It’s early, I’m pretty excited about this team and I look forward to every season.”