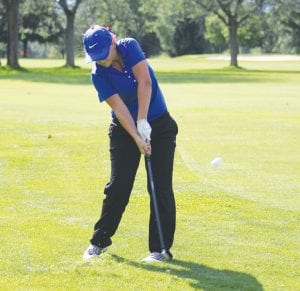 Mikaila Garrison sends an iron shot toward the green earlier this season.

The Cavalier boys finished ninth with 276 points at the SVL Jamboree Tuesday. Saginaw Heritage finished first with 36, Bay City Western was second with 37 and Midland was third with 81.

The Cavalier girls finished 10th with 308 points. Midland Dow was first with 52, Powers Catholic was second with 62 and Bay City Western was third with 69.

The Cavalier girls did not compete at the event. — K.W.

Carman-Ainsworth will play in the Genesee County Invitational next Monday at Flint Elks Club. – D.N.

FLINT — An American Basketball Association Team, the former Pontiac Firebirds, is coming to the area in November. Games will be played at Flint Hamady. The Firebirds are slated to arrive November 25 and tickets will be on sale in about three weeks says team organizer Chris McLavish. McLavish attended Flint Northwestern High and played for the University of Southern Alabama. Details: www.Firebirdbasketball.com. – L.P.