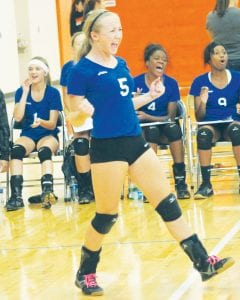 Carman-Ainsworth’s Katie Speaks celebrates a point in a recent game. On Tuesday, she contributed nine digs against Flint Powers Catholic.

Monday’s match at Owosso was canceled, as is next Monday’s meet at Brandon. – D.N.

In Saginaw Valley League competition at Flint Southwestern on Sept. 23, the Cavs got goals from eight different athletes to win 8-0.

This included unassisted scores by Quiton Pincomb, Isaac Young, Derrald Boggan and Zack Lloyd, as well as Yahya Abedlahy on the Ali Hachem assist and Ryan Macko with help from Derrald Boggan. Jacob Yost also hit nothing but net on a pass from Belal Traini and Aaron Hopson connected from Abdelhay.

“Hats off to Southwestern for competing the way they did after only a couple of practices,” said coach Jay Witham.

Carman-Ainsworth was at Davison for a league game yesterday. — M.S.