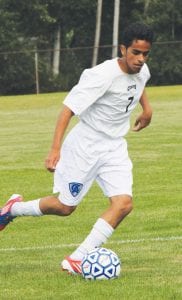 Yazeed Abdel-Hay works the ball up the field for the varsity soccer team.

The Cavalier boys finished 18th with 522 points at the Greater Flint Cross Country Championship Saturday. Corunna was first with 47, Clio was second with 56 and Davison was third with 64.

The Cavalier girls finished 19th with 576. Powers Catholic was first with 51 and Goodrich was second with 94.

Mikaila Garrison tied for 22nd place with a 95 to lead Carman-Ainsworth in the Saginaw Valley League season-ending tournament Sept. 30 at The Fortress in Frankenmuth. Alanna Gleason shot 108, Madysen League 110 and Ally Dittenber 121 as the Cavs totaled 434 to finish ninth. Midland Dow topped the 10-team field with 325, Davison was second with 341 and Lapeer third with 349. Davison’s Kamryn Johnston was medalist with a 77.

The Cavs will play in a Div. 1 regional today at Davison Country Club. – D.N.

In Saginaw Valley League competition at home on Wednesday, Powers’ Wolfang Ruth netted an early goal on the way to defeating Carman-Ainsworth 4-0. Also scoring for the Chargers were Will Haran, Chase Knoblock and Erich Ruth.

At Flint Metro League and Oakland County rival Holly on Thursday the Cavs edged out a 1-0 win on a penalty kick by Yahya Abdel-Hay during the 28th minute of the opening half.

“The ball was played down the right flank to Isaac Young who beat his defender along the end line and was fouled in the box,” said coach Jay Witham. “We did a great job taking their best player out of the game by man marking him, done by Jawanza Edwards.”

Ray Macko also came through with seven saves, including one that would’ve tied the game in the final minute of regulation.

“Our center midfielders (Ryan Macko and Quinton Pincomb) did a good job distributing the ball wide to the outside midfielders and forwards putting pressure on their defense,” Witham said.

On Sept. 30 at home in Saginaw Valley League action against Davison, both sides fought hard, only to see the contest end in a scoreless tie.

“Tough overall game between both squads. We out-possessed them 60% -40% but were unable to put one between the pipes,” said Witham.

Carman-Ainsworth will swim at Flint Southwestern Academy on Tuesday. – D.N.