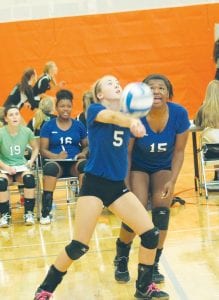 Katie Speak sends6 the ball back across the net for Carman-Ainsworth.

The Cavalier boys finished 21st with 544 points at the Heritage Invitational Saturday. Heritage finished first with 56.

The Cavalier girls did not post a team score. Midland Dow finished first with 44.

On Thursday the Cavs lost to Genesee County and Flint Metro League rival Flushing 3-0. Scoring for the Raiders were Joe Griffus, Austin Sordly and Leighton Chappell.

“Flushing did a goal job pressuring us and we struggled keeping our composer. We did a poor job staying with our marks through the midfield,” said coach Jay Witham.