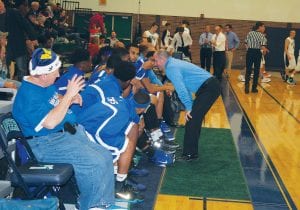 Head coach Jay Witham talks to the players on his bench during the first half of a Saginaw Valley League road game.

The Cavaliers dominated Genesee County rival Davison 72-26 in a Saginaw Valley League-South matchup on Friday at home. Leading this charge for Carman-Ainsworth was Omari Duncan with 19 points and scoring nine each were Terry Armstrong and Mike Fletcher.

“We got after them defensively, pressured them full court and got some easy turnovers,” said coach Jay Witham.

Carman-Ainsworth next takes the court at Clarkston for a non-conference contest on Jan. 5. — M.S.

Two Lady Cavs had double-doubles and seven other players scored as Carman-Ainsworth routed Davison 59-31 last Friday in a Saginaw Valley League-South game at home. Destiny Strother had 14 points and 10 rebounds and Chelsey Carpenter had 10 points and 10 boards as the Cavs, 3-2, 1-2 SVL, snapped a two-game losing streak. Randi Richardson added 11 points and six steals and Harmany Williams had eight points.

Jordan Bair bowled a 473 series on games of 214-259 and Jordan Nunn rolled 189-212 as the Cavaliers opened Saginaw Valley League play Saturday with a victory over Flint Southwestern at Colonial Lanes. Milton Gibson added 161-215 and Robbie Wheeler rolled a 234 second game.

Carman-Ainsworth will resume its season Jan. 2 with an SVL match against Mount Pleasant at Northern Lanes in Sanford. – D.N.