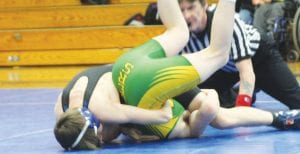 The Carman-Ainsworth boys’ team stayed in a three-way tie for first place in the Saginaw Valley League last Saturday with a 17-13 victory over Lapeer at Stardust Lanes in Saginaw. Jordan Nunn bowled a 231-204 series and Milton Gibson III rolled 204- 214 as the Cavaliers, 3-0, shared the top spot with D avison and Bay City Western. Jordan Bair added 169-215 and Wanya Montgomery 170-162.

Carman-Ainsworth boys placed next to last at the Hawk Relays at Saginaw Heritage last Saturday. Host Heritage won the meet with 356 points, DeWitt was second with 374 and Lake Orion third with 354. Creek had 306, Davison 212, Carman-Ainsworth 172 and Oscoda 124.

The Cavaliers picked up seven forfeit victories against Davison’s B team and won six other bouts on the mat, three by fall and three others in dramatic fashion.

Damion Wilkes opened the meet with a pin in 4:43 at 125 pounds and Carman- Ainsworth took the next four weight classes by forfeit for a 30-0 lead. Davison got its only win with a fall at 152.

At 160, Dominique Horton won a seesaw battle with Davison’s Logan French by scoring a takedown with 48 seconds left for an 8-6 decision. Keondrece Johnson followed with a first-period pin at 171 for a 39-6 Carman-Ainsworth lead.

Michael Byrd followed that with the most dramatic win of the night, getting an escape with one second left for a 9-8 victory at 189.

The decision clinched the team victory at 42-6, but the Cavs followed with two more exciting wins. Ronald Roland took down Davison’s Remie Martin 10 seconds into the third period to break a scoreless duel and earn a 2-0 victory at 215. Grayden Hamilton then pinned in 14 seconds at heavyweight to make it 51-6. Davison forfeited the last three weights.

The outcome was different against Dow, which took leads of 10-0 and 37-6 and won nine of the 14 weights.

Coreyonte Thomas gave Carman- Ainsworth its first points with a 37-second fall at 145 to make it 10-6, but Dow won the next five bouts to clinch the victory at 37-6 with five weights left. Hamilton received a forfeit win at heavyweight, and Elijah Brandon followed with a 15-4 major decision at 103. Jacob Yost pinned in 1:05 at 112 for the Cavs’ last victory on the mat.

Carman-Ainsworth will host another SVL quadrangular next Wednesday, with Bay City Central, Saginaw Heritage and Dow coming into town. – D.N.