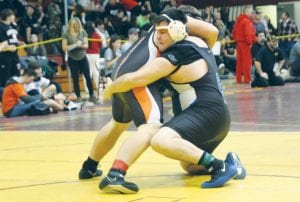 The Carman-Ainsworth boys’ team fell out of a tie for first place in the Saginaw Valley League last Saturday, beating Midland 30-0 but losing to Saginaw Heritage 19-11 in matches at Gerlach’s Bowling Center in Lapeer and Roll-AWay Lanes in Davison. The Cavaliers are tied for second at 6-1, one game behind 7-0 Davison.

A short-handed Carman-Ainsworth team finished seventh in the Mt. Morris Invitational last Saturday, going 2-3. Of the wrestlers that did show up, Grayden Hamilton went 5-0 at heavyweight. Going 4-1 were Jacob Yost at 112 pounds, Anna Alfaro at 119, Marcus Jones at 135, Nathan DeLong at 140 and Ronald Roland at 215.

Carman-Ainsworth will wrestle in the Allen Park Invitational this Saturday. – D.N.