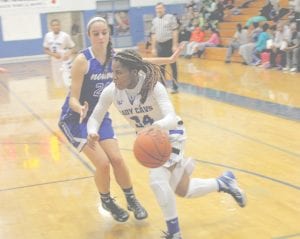 At Davison on Tuesday in a Saginaw Valley League-South contest Carman- Ainsworth found itself in a close contest for the initial three quarters before finally pulling away 79-55. With the win the Cavaliers raised their season record to 15-2 overall, 9-0 SVL-South.

“In the fourth quarter Davison ran out of gas, but at the end of the third I want to say it was a four-point game,” said Carman-Ainsworth coach Jay Witham. “They played harder than us and outworked us on the boards. They did a great job shooting the three. They had a couple guys who made a lot of outside shots. In the fourth we just played them in man defense. Which we did most of the game, but we finally got after them and made them turn the ball over. That allowed us to get out and run.”

Scoring 30 to help head up this victory for the Cavs was Terry Armstrong, an effort complimented by the ball handling and decision making of players like Aaron Williams and JaKavien Lewis.

“(Armstrong) attacked the basket and made some free throws, even though we shot poorly from the free-throw line. He was in attack mode. We got out and ran and our guards Williams and Lewis did a great job getting him the ball in the open court,” Witham said.

In a SVL-South home game on Feb. 11, the Cavaliers dominated Flint Northwestern Academy 88-45. Having used their strong start to claim a 58-24 lead at the half, Armstrong had 18 points, three rebounds and a steal, Michael Fletcher managed 14 points, eight boards, two steals, one block and an assist and Williams added 12 points, three boards and one steal.

Omari Duncan also came through for Carman-Ainsworth to the tune of 11 points, two rebounds and a steal, Chan Pearson was good for 10 points and one rebound and combining for 16 points, 10 assists and a steal were Jarell Giles and Lewis. The Cavaliers outscored Northwestern in every quarter. This includes 32-10 in the first, 26-14 in the second, 16-10 in the third to extend the lead to 70-34 and 18-11 in the fourth.

The Cavaliers, 12-2 overall, have a league game tomorrow at Flint Southwestern Academy. – M.S.

Carman-Ainsworth moved within one game of its first girls’ basketball conference championship in school history when it beat Davison 56-40 in a Saginaw Valley League-South Division game Tuesday night at Davison. The Cavaliers, 7-2 SVL-South, 13-4 overall, will clinch at least a share of the league crown if they can beat Flint Southwestern on Friday night at home.

“Davison played a really good game,” said Carman-Ainsworth coach Lance Belill. “It was only a four-point lead with four minutes to go, but we made some key shots and finished well on the free-throw line.”

On Feb. 10, Randi Richardson had 20 points, eight rebounds, four assists and three steals as Carman-Ainsworth beat Fenton 53-33 in a non-league game at home that was a makeup from the previous night. Harmany Williams added 13 points and Destiny Strother had eight points and five steals. The Lady Cavs took control early with a 12-4 first quarter and led 27-14 at halftime.

Jordan Bair rolled the league’s high game of the night with a 258 and Milton Gibson tied for the high series with a 442 as Carman-Ainsworth beat Lapeer 19-11 in a Saginaw Valley League position round match last Wednesday at Grand Blanc Lanes. Gibson had games of 223 and 219, Masen Ancira rolled a 200 and Wanya Montgomery bowled a 194 as the Cavaliers clinched third place in the final standings at 9-3, two games behind co-champions Davison and Bay City Western. Carman-Ainsworth started fast with a 212 Baker game.