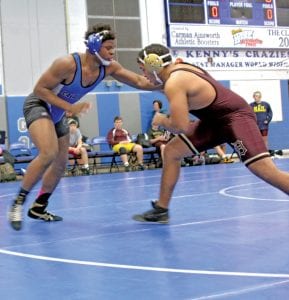 Ronald Roland will make his second straight appearance in the state finals next week after finishing fourth in the Div. 1 regional last Saturday at Oxford. The junior 215-pounder won his first bout 4-1 over Clarkston’s Percy Fowler but then dropped into the consolation bracket with a loss to eventual champion Sam Kinne of Lapeer. Roland then beat Midland Dow’s Brent Booth 4-2 to reach the third-place final, where he lost to Davison’s Tanner Thomas 7-3.

The top four placers in each weight class advanced to the state individual finals March 3-5 at The Palace of Auburn Hills. Roland will take a 49-13 record there.

Elijah Brandon also fell one match short at 103. The senior lost to Oxford’s Liam Hillary in 4:30 but kept his season going with a 9-7 decision over Grand Blanc’s Carson Humphrey. Brandon then bowed 11-0 to Clarkston’s Mac Hanselman to close out his senior year at 42-17. – D.N.

BIG RAPIDS – A former director of the Flint Junior Golf Association will be one of four inductees into the Michigan Golf Hall of Fame this year.

Steve Braun, a Flint Southwestern graduate who led the FJGA from 1975- 85 and helped grow membership to 1,100 golfers, will be inducted June 5 at Ferris State University’s Katke Golf Club. That will be six months to the day after he was inducted into the Greater Flint Area Sports Hall of Fame on Dec. 5.

Braun also served as a tour director for the American Junior Golf Association and received the AJGA’s national service award in 1992. He brought an AJGA event to Flint in the 1980s with the Great Lakes Buick Junior, now the Randy Wise Junior Open and the longest running non-major on the AJGA tour.

Braun, who helped Southwestern win back-to-back state championships in 1962-63, eventually became a PGA Professional, most notably at Belvedere Golf Club in Charlevoix, where he now resides. This year he will serve as president of the Golf Association of Michigan.

The other 2016 inductees are Rochester teaching pro Ken Allard, Grand Rapids native and former PGA of America Teacher of the Year Todd Anderson and Michigan State professor and turfgrass disease specialist Joseph Vargas. The new inductees will give the MGHOF 113 members. – D.N.