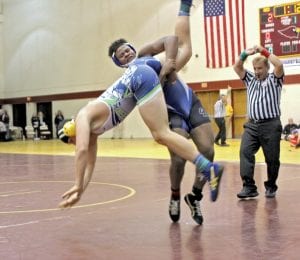 Carman-Ainsworth junior Ronald Roland will wrestle in the individual state finals for the second straight year, starting today at the Palace of Auburn Hills.

The boys won Friday’s team competition with 4,193 pins, 16 ahead of Howell and 64 ahead of Swartz Creek. The girls’ team qualified third with 3,579, nailing down the final state berth by 92 pins over Swartz Creek. Bay City Western won with 3,876 and Howell was second with 3,663.

Three Carman-Ainsworth girls advanced to state. Junior Montana Andrews was fifth with 1,165, junior Caity Cox seventh with 1,130 and senior Tiara Watson 10th with 1,099, nine pins ahead of the 11th-place finisher.

The state finals will be held at Sterling Lanes in Sterling Heights, with the team finals Friday and the individual finals Saturday. – D.N.

Ronald Roland will represent Carman-Ainsworth in the Div. 1 individual wrestling state finals starting today at the Palace of Auburn Hills. The tournament runs through Saturday.

Roland is a repeat qualifier at 215 pounds and comes into the Palace ranked 13th in the state at that weight by Michigangrappler.com. The junior has a 49-13 record.

Roland will open against sixth-ranked Jalen Goudelock (51-3) of Chippewa Valley. The winner will meet either fifth-ranked Robert McQueen (48-7) of Howell or eighthranked Josh Retting (41-5) of Livonia Franklin.

The top eight placers in each weight class will receive medals on the podium during Saturday’s finals. – D.N.