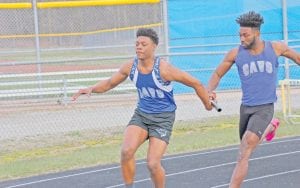 Carman-Ainsworth’s Kyle Mason (right) is one of six Cavaliers’ boys to qualify for the Div. 1 state meet.

The Cavaliers had six different runners and throwers make the state finals at the Davison regional last Friday. The top two in each event and the top two teams advance.

Kahlil Johnson qualified in the discus. Cahlil Brownlee made it in the 300 and 110 hurdles, the long jump and is part of the 1600 relay team.

Joe Stewart is also part of both the 800 and 1600 relay foursomes. Chris Sylvester is the fourth member of the 800 relay team.

In their final Saginaw Valley League-South road twin bill on Monday at Davison, Carman- Ainsworth won the first game 8-3 and lost the second 7-3. Coming through in the opener was Jacob Wilkos at 3-for-3 with a run and two RBI, Jawanza Edwards and Matt Durbin both went 2-for-4 with a run and adding a hit, one run and a walk apiece in four trips to the plate were Garret Gleason and Aaron Gagnon. Cooper Betancourt was 1-for-4 with a RBI.

In the late game Hunter Travis was 1-for-3 with a run, Austin Jerome went 2-for-3 with one RBI and Gleason had two hits and a run in three at-bats.

After taking a 2-0 lead in the second inning of a Saginaw Valley League crossover doubleheader on May 1 at Midland, Carman-Ainsworth held on until it allowed five runs in the fifth and another four in the sixth to lose game one 9-2. With just five hits total against 11 allowed, Gagnon and Betancourt both went 1-for-3 with a run and charting a hit in three at-bats were Hunter Travis, Trent Green and Matt Durbin.

The second contest was rather similar as the Cavs were held to just four hits against 10 allowed to lose 8-1. Spencer Fieweg went 2-for- 2, Gagnon was 1-for-3 with a run and Edwards had a hit in two at-bats. Carman-Ainsworth plays its final SVL-South twin bill on Monday at Davison. – M.S.

Midland’s Top Kamnark was medalist with a 6-under-par 66, eight strokes better than his nearest pursuer.

The Lady Cavaliers hosted Davison on Monday and dropped both ends of the Saginaw Valley League doubleheader, 12-1 and 12-0. Details were not reported. – B.P.