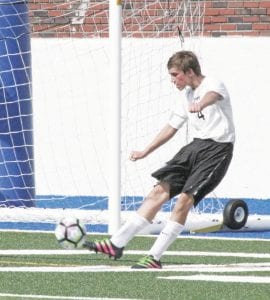 Carman-Ainsworth’s Jacob Yost kicks the ball out of the defensive zone.

The Carman-Ainsworth girls’ golf team had just three players in the mix at the PreSVL kickoff at the Flint Elks Club last Wednesday. While the girls shot a 403 for fifth place, they were not able to claim that spot because they did not have the required four golfers. Sloan Barkley carded 113 for 40th place, T’Onia Madison was 49th in 135 and Alexis Lowe was 55th in 155. – L.P.

The Cavaliers were unable to find the back of the net in non-league action last Wednesday, dropping a 3-0 decision to Kearsley. The Hornets got on the board with a penalty kick and added another tally about 10 minutes later. Less than a minute after that Kearsley added the game’s final tally to close out the contest. – B.P.