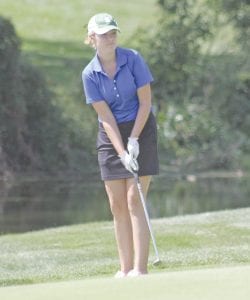 The Cavaliers were third at the Saginaw Valley League Cluster at Flushing Valley last Thursday. Midland won the title with 164, Powers Catholic was second with 180, Carman- Ainsworth third with 199, Midland fourth with 214 and Mt. Pleasant fifth with 222.

Hosting Midland for a Saginaw Valley League game last Wednesday, the Carman- Ainsworth boys’ soccer team fell to the Chemics, 5-0. The Cavaliers trailed by only one goal at the half before Midland put forth a four-goal explosion in the final stanza. – B.P.

The Lady Cavs go up against Holly today. – L.P.

DAVISON – The Flint River Chapter of Safari Club International will once again host its annual youth buck pole Saturday and Sunday at Madden’s Lounge in Davison.

Dennis Gepfrey of SCI says they will be accepting deer both days and hunters have until 8:30 p.m. on Sunday evening to enter their deer. Prizes will be awarded shortly after that. If it is warm this weekend, Gepfrey said hunters should bring their deer to Madden’s and enter their deer and then take it up to Thomas’ deer processing and hang it in the cooler. On Sunday afternoon all of the deer will be brought back to Madden’s for the main event. — L.P.