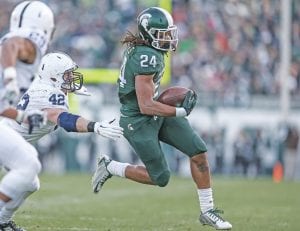 Holmes said he was inspired by the death of his grandmother, who passed away last Friday.

‘’I was in the middle of meetings and I broke out in tears and ran out,” he told Spartans.com. “But I knew I had a game today and I got the motivation from her to come out here and ball”.

Holmes gave credit to the O-line on his 73-yard run.

“They probably blocked the best they ever have since I’ve been here,’’ Holmes said. – L.P.