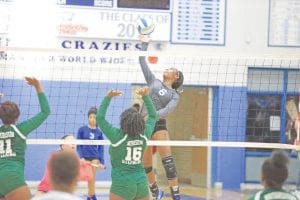 Carman-Ainsworth’s Diamond Lester goes up for the kill attempt.

The Cavs were slated to play at Saginaw Arthur Hill last Wednesday. No scores were reported. – L.P.

Carman-Ainsworth will be facing Lapeer on the road on October 11. – K.R.

“We missed a lot of serves tonight, but we had 23 aces on the night as a team,” coach Barb Hurand said. “I thought besides missing too many serves we played aggressive ball and made lots of solid plays.

“We’re working hard in the gym to improve every day, so it was nice to see the girls work well together. It was an overall team effort tonight and I thought Southwestern played well tonight, too.” – K.W.