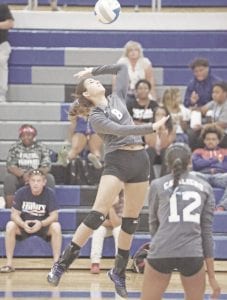 Carman-Ainsworth’s Emily Carroll (8) goes up for the kill as Angel Eubanks (12) watches the play.

EAST LANSING – It’s become a ritual of the fall sports season – hundreds of high school football teams across the state of Michigan gathering for watch parties, hoping to hear their names and match-ups called for the MHSAA Football Playoffs during the Selection Sunday Show on FOX Sports Detroit.

This year’s show is set for 7 p.m. (EDT) on Oct. 23, originating from the FOX Sports Detroit studios in Southfield. Mickey York, Justin White and Rob Rubick will host the show. In addition to the cable television broadcast, the show will be available via a live video stream on the FoxSportsDetroit.com website, and for mobile users on FOX Sports GO! – L.P.