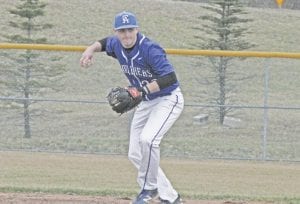 The Cavaliers dropped both ends of the doubleheader, 4-0 and 7-6, against Saginaw Heritage on Monday.

Logan Brassaw pitched an impressive first game, giving up only one earned run and four hits for the loss. Errors in the fifth inning that allowed three runs were the downfall for Carman- Ainsworth. Heritage’s pitcher scattered only three hits for the shut out.

Carman-Ainsworth held a 6-4 lead heading into the bottom of the sixth inning in the second game, but Heritage rallied for three hits following a grounding error. The game was called after six innings for a 7-6 final.

The Cavaliers faced Mt. Pleasant on Friday, losing the first 1-0 and the second 8-4. Chase Matusik gave up one run and four hits from the mound. Mt. Pleasant’s only run came on a bunt that brought in the run from third base. Aaron Gagnon pitched the second game to record the loss.

The Lady Cavs were shut out in an 8-0 loss to Davison on Monday. No stats were reported.

On Friday, Carman-Ainsworth fell 5-1 to Owosso. Owosso took a 2-0 lead by halftime then tallied two more goals before Carman-Ainsworth scored its first. Jasia Caldwell had the only goal for the Lady Cavs off a free kick at 23:10 in the second half. Keeper Arianna Vantine had 17 saves. Carman- Ainsworth had only three shots on goal.

Carman-Ainsworth took a big 9-0 loss against Dow last Wednesday. The game ended after just the first half. No stats were reported.

The Lady Cavaliers fell in both ends of a Saginaw Valley League doubleheader at home on Monday to Saginaw Heritage, 10-0 and 14-2. Game details were not reported.

Carman-Ainsworth is back on the diamond today to host Saginaw Arthur Hill. – B.P.

Only loss was at No. 1 Singles