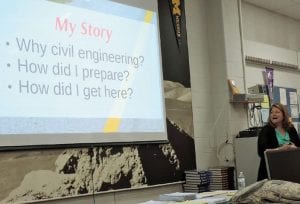 Panduren, a civil engineer, talked about her career path and other engineering fields and requirements.

She also talked about other Rowe projects including a sewer treatment system installed several years ago in Otter Lake and pervious concrete installed in a parking lot in Fenton as a solution to drainage and runoff problems.

As for her own career path, Panduren talked about courses taken as an engineering student at Michigan Technological University. She graduated in 1993 and took a job with Rowe the following year. She worked her way up through various jobs including project and division manager and was named company president in 2014.

“You wlll learn in the first month (on the job) that you don’t know as much as you thought. You are going to learn how to learn in college but you will be learning during your whole career.”

Technology is evolving and many aspects of engineering are much different than it was 20 years ago, she said.

Ethics and diversity are also required tools for an engineer’s toolbox, she said.

“You don’t want to make a decision that will hurt multiple people,” she said. She shared a story about meeting a NASA engineer who refused to sign off on the first space shuttle that blew up after launch in 1986.

“Ethically he said it was not the right decision and he would not put his name on it,” Panduren said. Someone else at his company signed off and the result is history.

Panduren said she is often asked what it takes to be an engineer. While an aptitude for math and science is good, Panduren said she regards leadership and teamwork skills as equally important.

Engineering projects require a lot of collaboration and being able to work with other people, she said.

“You don’t have to be the Valedictorian of your class, you just need the drive to succeed,” she said.

She advised choosing one that is sanctioned by the Accreditation Board for Engineering and Technology (ABET), which sets professional standards for applied science, computing, engineering, and engineering technology.

Panduren took questions at the end of her presentation in which students asked questions about hardest classes, job prospects, internships and best engineering schools.