Ruffolo named No. 1 in GMC sales for Michigan 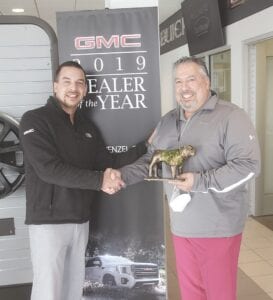 DAVISON TWP. — Nick Ruffolo of Todd Wenzel Buick GMC may have won the award for selling the most Buick/ GMC vehicles in the state of Michigan in 2020, but those who work with him at the dealership already know him as the “Big Dog.”

Besides his corporate award for being the number one volume sales consultant in the state of Michigan under the GMC brand, his colleagues at Todd Wenzel Buick GMC also wanted him to know just how proud they are of his accomplishment.

Josh Gordon, general manager at Todd Wenzel, said the staff at the dealership presented Ruffolo with a customized trophy they call the Devil Dog Award – a gold-colored bulldog with a camouflage shirt – to show their appreciation.

“Naturally, GM has its own recognition for performance and such, but we wanted to do something at the dealership level that added both a personal and professional touch to that,” said Gordon. “We wanted to congratulate him and sometimes it doesn’t seem like enough, so we wanted to show our gratitude and appreciation at the store level.”

Devil Dog not only represents Ruffolo’s persona as the “Big Dog” at the dealership, but also reflects his 10-year career in the U.S. Marine Corps, said Gordon.

“The thought behind getting Devil Dog was two-fold for him,” he said. “First, Nick is the Big Dog in the GMC World, he’s also the Big Dog at Todd Wenzel, and that sort of translates over into his personal life.”

Ruffolo, 57, said he was surprised about the award. He has worked in automotive sales for 26 years, the past 17 with Wenzel (and Jim Waldron before it was purchased by Wenzel) and said he is “very grateful and very humbled” to receive the award.

“To be where I am, number one in the state of Michigan, is attributed to the loyalty of my customers in and out of Davison, Lapeer, Grand Blanc, Genesee County and Lapeer County,” he said.

Originally from Washington, Pennsylvania, Ruffolo served in the U.S. Marine Corps from 1980-90. In the Marines, he said he was taught discipline, integrity, loyalty, uniformity and the importance of following rules and regulations.

He said the lessons he learned in the Marines can be applied to his day-to-day life now.

“You have to have some kind of structure in your life and in this business to keep customers and be where I am today,” he said. “It’s about the integrity of your customers’ trust in you.”

Ruffolo said he started out in the infantry, then went to the school of infantry to be an instructor. His last duty station was as an Inspector/Instructor, where he taught reservists and tested weapons and rounds for the Marine Corps and the Army.

During his time in the Marines, Ruffolo said he was married to a woman from Flint, and that’s what brought him here after he was out of the military.

He owned Nick E’s Party Store in Davison, now known as the Rock, which he sold in the mid-90s before he was contacted by Chris Olsen, who invited him out to Roberts Buick Pontiac to talk about a job with them. That’s where he began his career in car sales, he said.

“It really wasn’t a whole lot of change (from the party store) because you’re still dealing with people, just what I like to do,” said Ruffolo. “The hours, believe it or not, seem like they’re similar. If you want to make a living you have to be there.”

Customers are his priority, he said. At times, he said it hinders his personal life because he said he always puts his customers first.

“I always have. They can call me on a Sunday if somethings wrong and I’ll come back to the dealership to help them,” said Ruffolo. “It’s about people believing in me, it’s not the money anymore. It’s more for the customer now. I’ve always believed that from the get-go.”