Run With Geena draws 60-plus runners 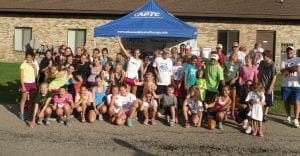 Geena Gall poses with the group who took part in the free Run with Geena One-Mile Race through Grand Blanc last Wednesday.

GRAND BLANC – It was a busy weekend back home for Grand Blanc and U-M grad Geena Gall. The 2012 Olympian came back to town to host her second annual Run with Geena free community one-mile run through the streets of Grand Blanc. Sponsored by Advanced Physical Therapy Center, Gall met her fellow runners in the parking lot last Wednesday to talk about her experience as a 2012 Olympian and 800- meter professional runner.

Before she led the racers down Saginaw and neighboring streets, Gall met with her fans, signed autographs and posed for photos. Gall topped the night off with a cool down and took part in the ALS Ice Bucket Challenge.

Gall is originally from Grand Blanc but now lives in and trains in Eugene, Oregon for her professional races. She is an assistant track coach for Oregon State while training to compete in the 2016 Olympics in Rio.

During her time at Grand Blanc, she was a three-time national 800-meter champion. Since then, she has gone onto be a two-time NCAA champion and 10-time All American, while running for the University of Michigan. Gall most recently earned a gold medal withher4x800mWorldRelaysteam. 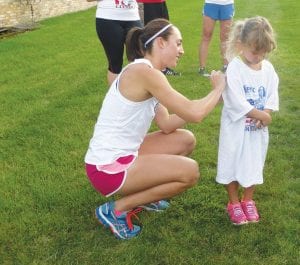 Geena Gall signs the T-shirt of one of the youngest runners.

Gall said that she loves to meet with the younger generation of athletes and hopes to inspire those to go for their dreams. She put them through a set of pre-race warmup exercises and talked with local print and TV media members before racing off with her group of eager participants.