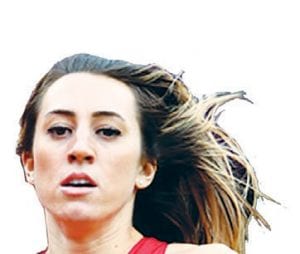 GRAND BLANC – 2012 Summer Olympian and 10-time NCAA All- American Geena Gall will return home to host a Run with Geena event leading up to the Michigan Mile and Crim Festival of Races. Run with Geena is a free 1-mile run on Wednesday, Aug. 20 that will take participants down Saginaw Street and neighboring streets in Grand Blanc. The race starts at Advanced Physical Therapy Center, 10809 South Saginaw at 7 p.m. The first 100 attendees will receive a free Geena Gall T-shirt.

Run with Geena sets up a busy weekend for the Eugene, Ore. resident, who will follow that up with a Meet-and- Greet on Thursday, Aug. 21 at the Crim Expo before running in the Michigan Mile on Friday, Aug. 22. Gall, who lives in Oregon with husband, Jeff, still competes professionally and after her sponsorship contract with Nike ended last year, picked up local sponsor Advanced Physical Therapy Center, which helped her rehab a torn ACL in high school. She’s their official spokesperson and credits the Center for her recovery.

Running is not Gall’s first sport. At Grand Blanc High, she was a star basketball player and competed in track to condition for the basketball season. During an AAU basketball game, Gall tore her ACL. She says after therapy at Advanced Physical Therapy Center, she was able to make a full recovery and led the Lady Bobcats to a conference championship. Shortly after that event, Gall started qualifying and winning several track competitions, eventually setting aside basketball to concentrate on her running career.

“The Run with Geena event is an awesome opportunity to talk with Geena oneon one about running and what it was like to compete in the Olympics,” said Linda Gibbs, physical therapists and co-owner of APTC. “I think this is a great way to get people of all ages inspired to go for their dreams and to let people know that you can overcome obstacles. Plus, it is a fun way to get your workout.”

In a phone interview last Thursday from Oregon, Gall said she just wants to inspire people to come out and run, whether just as a recreational hobby or competitive sport.

“Last year I partnered with Advanced PT for the first race and had a lot of younger runners and runners just starting out,” Gall said. “Hopefully, this year will be much bigger. We’re going to be right in Grand Blanc on Saginaw Street with free T-Shirts, autographs, and just a chance for the community and runners of all ages to run with me for one mile, ask questions, I’ll give them tips, and talk about the Olympics. I really hope a lot more come out for the run that will be later in the evening, 7 p.m. We changed the time to a little later in the evening to allow more people to get home from work in time to take part.”

Injuries are not new to Gall, so the partnership with Advanced PT was an easy choice for Gall.

“I had a calf injury a few weeks prior to the Olympics, so I’ll talk about that, too,” Gall said. “First, I just want to start with the fundamentals, stretching and running drills I do before I run or do a track meet. Just lay the foundation and lay the proper tools to run faster. It’s something I learned later in my career, and I want to hopefully teach them at a younger age. The goal is to teach runners at Run with Geena how to deal with injuries and setbacks, and about going after your dreams and your goals. I just want to be a mentor and help inspire people.”

Gall said she hasn’t been back in Grand Blanc since March when she was inducted into U-M’s Sports Hall of Fame. She said she’s always excited to come back home and run.

“I took up basketball as my main sport and didn’t start running track here and there until eighth-grade in middle school and then it just developed into a passion and I exceled at it. I gave up basketball to concentrate on the running.”

Gall says running is a sport for just about anyone.

“Everyone can run, everyone can get out there and lace up their tennis shoes and go for a jog,” she added. “To have a big community event like the Crim to bring people from all over the U.S. and the world to run, I just love running, it’s just so enjoyable. I hope a lot more people come out to run with me this time gearing up to the Crim. It’s electrifying. I’m super excited to be running the Crim again and partnering with Advanced PT. When I had an injury, when I tore my ACL in my right knee, I had the reconstructive surgery and just wasn’t sure if I could even be an athlete again and they were so instrumental in getting me back to where I was and even better after learning about everything they put me through as part of my recovery.

After graduating from U-M, Gall competed for Team USA at the 2012 Olympic Games in London and in the 2009 World Championships in Athletics in Berlin in the 800 meter. She most recently earned a gold medal in the 4×800 relay in the 2014 Inaugural World Relays, setting a new American record. Gall said the time was “8:01 and some change, which was super exciting for me personally.” She’s also a backto back 800 meter NCAA Outdoor Champion, set several collegiate records while at U-M and at Grand Blanc High School, was a three-time national champion. She also competed at the North American/Central American Caribbean Championships in El Salvador in 2007 and in Toluca, Mexico in 2008.