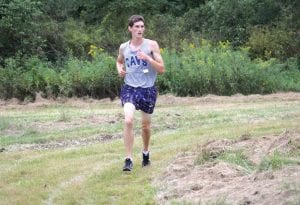 Carman-Ainsworth’s Tyler Pangerl rounds a corner on the course.

BAY CITY — With only the top three teams and any individual in the top 15 not on those teams qualifying for the state meet Nov. 2 at Michigan International Speedway, regionals will trim the field greatly this weekend.

Tyler Pangerl, Carman-Ainsworth’s top runner has a good shot at qualifying and has led the young team all season long. He just placed 10th at the Saginaw Valley League meet.

Also looking to make noise are Ahmir Dunn, Larry Dunn, James Johnson, Erick VanDuyne, Juwan Willis and Keith Belk. On the girls’ side, Bailey Curtis is in her first year of running, along with Teaira Davis and Italia Daniels. All three are track runners looking to blossom as distance runners. They’ll have to qualify as individuals, though, as the team doesn’t have enough runners to field a full team. — L.P.