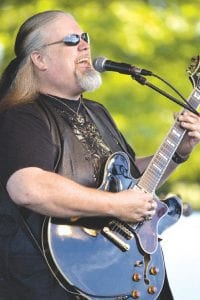 Rusty Wright performing with his band at a recent venue.

FLINT — The Rusty Wright Band plans to put the exclamation point on a weekend filled with music June 10 at the 45th Annual Flint Art Fair.

The concert will be the group’s local debut performance with former Grand Funk Railroad member Dennis Bellinger on bass. The group is scheduled to perform at 3:30 p.m. in the entertainment tent located on the art fair grounds near Longway Planetarium.

“We were extremely happy when Dennis called to say he was interested in working with us,” said Rusty Wright. “It is pure pleasure working with a musician of his caliber, plus he’s a very nice guy, to boot. Rehearsing with him has been fun because he isn’t afraid to plug his own interpretation and playing style into songs we’ve been playing for years. We took several months off while we were auditioning bassists and then rehearsing the new show with Dennis, so we’re coming out of the gate fully energized for the start of our concert season. ”

“Performing at the Flint Art Fair has become sort of a tradition with us,” said Laurie Wright. “Most of our performances are ticketed concerts or out of town festivals but we always try to play the Art Fair if we can. We love seeing friends there and we particularly enjoy working with Lee Waara, who traveled with us to S. Korea and Japan in 2009 as our audio tech.”

In 2004 Flint guitarists Rusty and Laurie Wright put together the first incarnation of the group that would become the Rusty Wright Band. It was only the band’s second show together when they opened for Lynyrd Skynyrd, a performance which garnered them a standing ovation and prompted Skynyrd guitarist Rickey Medlocke to exclaim “Dude – where the h— did YOU come from?”

Since then, Rusty, Laurie and their band have made the leap from regional favorite to enjoying international recognition and performing at some of North America’s top blues festivals and music events. The band’s current lineup includes Rusty Wright and Laurie LaCross-Wright of Burton (formerly of Davison), Dave Brahce of Perry, and Peter Haist and Dennis Bellinger of Flint.

Earlier this year the band was featured on an episode of WKAR’s Backstage Pass, a syndicated PBS music program produced in East Lansing. The show can be viewed online at: youtu.be/GoI2kv6UEiM

The group will be performing in August at the I Chews the Blues Festival in Davison, and also with Kenny Wayne Shepherd at The Whiting in Flint later this year. — G.G.