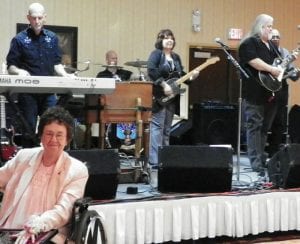 The Rusty Wright Band strikes up a tune during retirement party of his mother Sandra Wright, pictured in the foreground.

FLINT TWP.— Entertainment by the up-andcoming Rusty Wright Band was just one aspect of the multifaceted life of Sandra Wright highlighted during a retirement party for the former treasurer last weekend at the Holiday Inn-Gateway Center in Mundy Township.

As the son of the five-term township treasurer, who retired Nov. 19, Randy Wright was a natural choice to underscore an evening that covered Sandra Wright’s own musical accomplishments including a Top 10 finish at a National Quartet Convention in Nashville, Tenn. when she was part of the Temples singing group.

Randy Wright’s band is amassing a following performing at top blues festivals nationwide and in Asia including shared billing with top acts including Lynyrd Skynyrd, Etta James, Johnny Winter, Mark Farner and many more, according to information on the band’s website.

An eight-page full color program provided many more details about Sandra’s Wright’s personal and political life. Some little or unknown facts included that she was instrumental in starting the homecoming parade when the Carman and Ainsworth school districts merged; was awarded a Key to the City of Flint for her work in substance abuse; and that she’s a professional seamstress able to produce quality prom and wedding dresses.

Her guest list included a who’s who of local politicians including judges, the county sheriff and drain commissioner, county commissioners and other elected officials.

Genesee County Prosecutor David Leyton served as the master of ceremonies for the program in which several proclamations were presented including one from the Patsy Lou Williamson Automotive Group. Leyton served with Wright during his stint as a Flint Township clerk and trustee.

Wright’s involvement with the American Disability Association was also highlighted. She lost a leg in 2009 due to illness.

In her acknowledgments, Wright said she always tried to do the right thing in her public service career.

“I had a goal in 1992 of being the best that I could be in serving the people and 20 years later I feel confident that I have served with honesty and integrity and hope that something I did was a compliment to the residents and will leave it a better place,” Wright said.