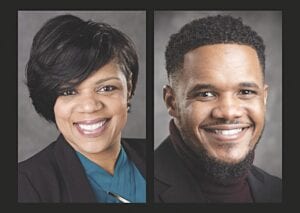 FLINT — The Ruth Mott Foundation Board of Trustees welcomes two new trustees, both of whom have deep roots in the city and careers dedicated to helping Flint residents thrive.

Debra Furr-Holden, long-time Flint resident, and Ja’Nel Jamerson, a Flint native, joined the Board in September.

Furr-Holden, Ph.D, is an epidemiologist who serves as dean of Public Health at Michigan State University and co-director of the Healthy Flint Research Coordinating Center. An alumna of Flint Northern High School, Furr-Holden received her bachelor’s degree from Johns Hopkins University and her doctorate from Johns Hopkins Bloomberg School of Public Health.

In January of 2016, Furr-Holden returned to Flint to focus on health equity and believes in the importance of conducting her work “with” community, not doing it “to” or “for” her community. Furr-Holden also serves on the Advisory Board of Flint ReCAST and co-chairs the Community Advisory Task Force to the Flint Police Department.

Jamerson is executive director of the Flint Early Childhood Collaborative and Educare Flint. Prior to this role, he spent a decade serving his community in the field of education, most recently as executive director of the Flint & Genesee Literacy Network. Throughout his career, Jamerson has been dedicated to building holistic systems that focus on the well-being of children and their families together.

Jamerson graduated from Flint Southwestern Academy before earning his bachelor’s degree, Master of Arts in Secondary Education with a specialization in Urban Education, and Education Specialist in Curriculum and Instruction from the University of Michigan- Flint. He is currently pursuing a doctorate in Education Leadership.

“I am thrilled to welcome Debra and Ja’Nel and their unique perspectives to our Board. Their commitment to authentic community engagement and respective work to eliminate barriers for children and adults are tremendous assets for the Ruth Mott Foundation and our community as a whole,” said Maryanne Mott, Chair of the Board of Trustees. “I look forward to pursuing the Foundation’s mission together in north Flint.”