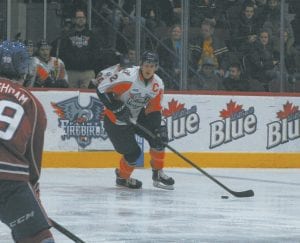 FLINT – Despite some valiant efforts, the Flint Firebirds lost their 15th game in a row on Saturday night at the Dort Federal Credit Union Event Center in Flint. Flint lost 5-2 to the Sarnia Sting.

Sarnia got it going early and often, opening the scoring just 58 seconds into the game with a goal from Travis Konecny off a feed from Jakob Chychrun.

The score remained 1-0 until near the midway point of the opening stanza when Matthieu Henderson came flying out of the penalty box and caught a pass from Francesco Vilardi before firing it home on the breakaway to draw even.

Sarnia, however, would get the lead right back just four minutes later as Konecny got his second goal of the game. The Sting upped their lead to two early in the second as Sam Studnicka connected on a power-play goal 2:56 into the frame. Almost instantly after that, it became a 4-1 game with another power-play goal, this one from Pavel Zacha.

Flint finally stopped the bleeding a few minutes later when Will Bitten passed it up to Vili Saarijarvi, who fired a slap shot from the top of the face-off circle to cut the deficit to two. By the end of the period, though, Jordan Kyrou added another for the eventual final score of 5-2.

The night before in Sarnia, Flint nearly ended the skid but came up just short in a 4-3 loss to the Sting. Patrick White scored the game’s first goal for Sarnia at 7:55 of the first period, and then just seconds later, Nicholas Caamano evened it back up for Flint. Sarnia, though, would go into the locker room with a one-goal lead after Matt Mistele added another with a few minutes remaining.

The Firebirds got the game tied once again early in the second period with Saarijarvi firing one from the blue line. The end of the second period was not friendly to Flint, though, with Josh Jacobs and Pavel Zacha each adding a goal in the final five minutes of the stanza. Saarijarvi added a power play goal in the third but it wouldn’t be enough to overcome Sarnia’s offense.

Flint still remains in last place in the West Division at 14-28-3-2 for 33 points and is currently 11 points behind the Saginaw Spirit for the final playoff spot in the Western Conference with 21 games remaining. Flint can gain some ground on the Spirit on Wednesday as it travels to Saginaw before hosting Sudbury on Friday and Kitchener on Saturday.