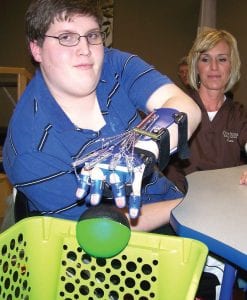 Tim Drost works with Kristine Stefanko of CornerStone Rehabilitation in Davison Township on his SaeboFlex therapy.

DAVISON TWP. — Tim Drost had almost given up hope he’d be able to play his favorite video games again after suffering neurological damage from a bout with the H1N1 virus back in 2009.

Drost, 17, a student at Davison High School, was an avid video gamer and had aspirations of one day programming video games. But the virus left him with brain damage affecting his motor skills and vision. Among the symptoms he suffered was his hands were constantly clenched into fists making him unable to perform almost any task.

That was until he and his family learned of a neurological orthotic device called the SaeboFlex which allows patients with very little residual hand function to immediately begin performing task-oriented, grasp and release activities. Once they knew of the product, Drost’s father, Don, said the family checked around the county to see what rehabilitation facilities carried the device.

They found CornerStone Rehabilitation, 9100 Lapeer Rd., Suite C, offered the device, but there was a catch: the Drost’s insurance would not cover the cost of the therapy. CornerStone stepped up to help Drost with the Saebo device and he is currently undergoing two 45-minute a day sessions. 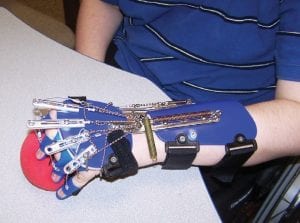 Drost after being fitted with his SaeboFlex

Already, the results are noticeable.

“This has helped him tremendously,” said Don Drost. “ He’s made great gains since he started using it. Tim has a pretty rough road ahead, but he should be able to get back to his normal functions.”

Drost said he no longer keeps his hands clenched since the therapy has helped him rebuild the use of his hands. Soon, he said he hopes to take back up his favorite pastime.

“”I’m getting close to playing video games again,” he said. “That’s my goal. I always wanted to program video games.”

Kristine Stefanko of CornerStone Rehabilitation said the facility is offering free screenings for the SaeboFlex and SaeboReach. The therapy is useful not only with cases like Drost’s, but also with stroke patients.

As the leading cause of long-term disability in the U.S., stroke affects over 700,000 Americans every year, leaving many with crippling side affects including the loss of hand function. Saebo’s pioneering treatment protocols are based on new research documenting the brain’s remarkable ability to “reprogram” itself following injury.

“With SaeboFlex you can be 20 years post stroke and still benefit from it,” she said. “With Tim his hands are becoming more a part of his life again.”

The therapy involves wearing the SaeboFlex device over the hand while picking up a series of balls and putting them into a basket. Stefanko said CornerStone is one of the few facilities in the area certified to use the Saebo devices.

Don Drost said Tim still has a long road ahead with his physical therapy, but he is pleased with the progress CornerStone Rehabilitation has shown with his son.

“This has made a big difference to me, I’ve seen great gains,” he said. “It makes a difference when somebody cares and that’s the feeling we get from CornerStone.”

To discuss a free screening for Saebo, call 810-653-0100. For more about the SaeboFlex or the SaeboReach go to www.saebo.com.