Safe one day, unsafe the next

No ice should ever be considered safe 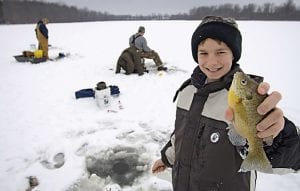 With the official start of winter that comes each December 21, also comes the reminder that ice on frozen waterways should never be considered 100 percent safe—ever.

Outdoor recreation lovers, including ice fishermen, recreational hockey players and figure skaters, are cautioned that no ice is ever to be considered completely safe.

While many falsely believe that ice safety can be judged by looking at the ice or jumping up and down on it, several underlying situations make that untrue. Cloudy ice is no safer than a slick, shiny sheet of clear ice. In fact, blue, clear ice is safer than white or cloudy ice, and, snow-covered ice is always weaker than clear ice surfaces.

Nearly every year the state has reports of a few fatalities from people falling through the ice while driving motor vehicles, snowmobiles, or ATVs onto frozen lakes, rivers, ponds and streams.

Michigan’s changing weather patterns are in full swing once again this year, with a La Nina pattern predicted to blanket Michigan with a colder, snowier winter. When that will happen remains to be seen as the snow has been scarce and the temperatures too warm for solid freezing of waterways. That will likely set up the similar scenarios we see reported on the news and in papers each year, when fishermen get too close to the inlets and outlets of the lakes and their underlying currents, and they wind up falling through. State officials reported last year an increase in ice rescues because of the false sense of security some have, especially on their favorite frozen lake.

Safe one day, unsafe the next, officials caution, especially as the weather continues to change from heavy snows, to rain accompanied by high winds. Those all affect the ice thickness on a daily basis.

The Michigan Dept. of Natural Resources dismisses the public’s yardstick of ice thickness as a guideline for determining safe ice, saying that not all ice is created equal. A press release notes that a few inches of clear, fresh ice can be stronger than a foot of ice that has melted and refrozen. They add that any ice that is under a blanket of snow should be considered suspect, as snow can insulate ice, slowing the freezing process or, if heavy enough, actually pushing ice down and causing water to flow over the surface.

It’s also important to note that ice rarely forms evenly on any body of water. Areas with currents or underwater springs always will have significantly less ice than other parts of a lake. The DNR cautions that just because someone is driving a truck on the ice — something they never recommend — does not mean that same sheet of ice can support someone on foot on a different section of the lake.

So just how does one determine how safe a surface of ice is? The DNR offered these recommendations for testing ice safeness:

• Always travel in pairs whenever venturing onto the ice, and always let someone know where you are going and when you expect to return.

• Carry a spud and test the thickness of the ice in front of you as you head to your spot on the ice.

• Avoid inlets and outlets, areas with natural springs, or anywhere structures, docks, pilings or timber extend through the surface of the ice.

• Pay attention to the wind direction, especially on large bodies of water, as ice can break off and float away.

• Wear a personal flotation device and carry two nails attached to string that can be strung through the sleeves of your coat as an emergency aid to grab hold of the edge of the ice if you break through. Rope is recommended, too.

• Don’t panic if you fall through the ice. Turn toward the direction you came from and try to get hold of the ice to slide out. Once out of the water, do not stand, but roll away from the water.

• Do not run to anyone who falls through, but get a rope, pole or ladder and extend it to them.

Snow covered ice, especially for ice fishermen, is not always safe. The Dept. of Natural Resources reminds everyone to be extra careful on any ice covered body of water in the winter.