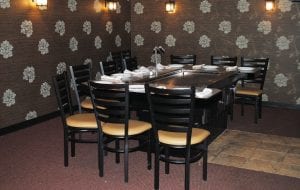 A new, private hibachi room featuring four tables with seating for 10 at each recently opened inside Sagano Japanese Bistro & Steakhouse in Flint Twp.

FLINT TWP. — Long-standing customers and those new to Sagano Japanese Bistro & Steakhouse, 2065 S. Linden Rd., now have the opportunity to enjoy a variety of Japanese food with the recent addition of a new, private hibachi room and the soon-to-be open express grill side.

The restaurant, which is known for its cuisine and rousing performances by hibachi chefs, is owned by Shiro Inoue (Ino). Construction on the new addition began in September 2010 and was finished right before Christmas, in time for Christmas and New Year’s Eve customers said Ino.

The new, private hibachi room can seat up to 40 people with its four tables accommodating 10 people at each. The room can be split into two sections, featuring two tables and seating for 20 or can be left open for the larger crowd.

The new hibachi room is open for large groups, weddings, business meetings and business functions, and privacy is key with the ability to close off the entire room to the restaurant.

“Our previous private room was next to the grill and it was too noisy,” Ino said. “Now, we can close the doors and it’s completely private.” The hibachi rooms are suited to business functions with the addition of two, flat screen TVs on both sides giving individuals the ability to show presentations.

With the hibachi grill, customers can choose from a variety of dinner options, including hibachi chicken, hibachi shrimp and hibachi steak; different Emperor’s dinners; and combination dinners. There also is a kid’s menu for smaller diners.

Ino said the express grill side should be open for customers in approximately two weeks. When it opens, customers can order off the restaurant’s current menu, which includes noodles, chicken and beef teriyaki, sushi, sashimi and tempura dishes. Ino recently ordered a laser beam deep frying machine from Japan that will deep fry skewed meat, seafood and vegetables.

“It cooks with a laser beam. You put the water and oil inside, and then put the skewer in and deep fry,” he said. “It cooks quickly and the meat is tender.”

Another unique aspect of the express grill side will be the ability for customers to order takeout from Sagano. “So many customers asked me for takeout so now with the new system for express, customers will not have to wait,” he said. One dish that Ino believes will be popular with customers is a dish that features rice on the bottom and either teriyaki beef or chicken on top.

When the express side opens, it will feature seating for approximately 40 people and will have a separate entrance from the main restaurant. With the addition of the hibachi rooms and express grill, Sagano now has eight hibachi chefs. Sagano also specializes in sushi and some menu items include a Kampyo Roll, a Japanese sweet preserved squash roll; a California Roll, featuring crab stick, avocado and cucumber with caviar; a Yummy Yummy Roll, featuring salmon, white fish, tuna, kani and cream cheese then deep fried with eel sauce, spicy sauce and caviar; and a Stairway to Heaven Roll, featuring a scallop, cream cheese and asparagus, then wrapped around with a crunchy outside and topped with white tuna and salmon.