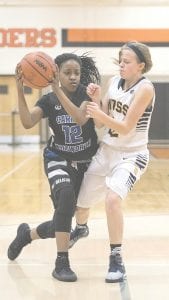 Carman-Ainsworth’s Chenelle King drives to the basket against Flushing. The Cavs and the rest of the SVL will see some changes within the league as early as next season.

SAGINAW – Word came down last Wednesday through media outlets that Grand Blanc High was ceremoniously kicked out of the Kensington Lakes Activities League on a 13-1 vote, beginning with the 2018-19 seasons. That will likely mean that Lapeer’s bid to join the KLAA will be rejected. That leaves both districts in a pickle as they continue to try find a competitive athletic conferences for their student-athletes.

Distance was cited as the main reason for the KLAA principals to kick Grand Blanc to the curb saying that the opposing schools had to travel 40 miles or more to play Grand Blanc. Last May, nine member schools of the KLAA fled and formed a newly-announced Lakes Valley Conference that now includes Walled Lake Central, Western and Northern, Lakeland, Milford, South Lyon, South Lyon East, Waterford Kettering and Mott. Those schools also cited competitive fairness in all sports as their main reason for creating a new league. Distance to other former KLAA schools was the secondary reason.

When it was announced that John Glenn would be added, a secondary announcement came through that said that Flint Northwestern would not be fielding a football team from here on out. That didn’t cause a scheduling conflict within the league as John Glenn could slide into Northwestern’s league dates on the gridiron.

Within the last few weeks, though, it was made public that Northwestern will no longer field any sports teams whatsoever following the conclusion of the current school year. It appears as if Northwestern will be gradually phased out, eventually leaving Southwestern as the Flint Community Schools’ lone remaining high school.

There has been no conformation as of yet, but it is likely that students attending Northwestern next year should be able to play on Southwestern’s teams if they choose to.

John Glenn taking over Northwestern’s league obligations seemed to be perfect timing, but that’s not the only concern within the SVL. Due to low test scores, Saginaw High is currently on a list of 38 schools throughout the state that could be forced to close at the end of the school year. The decisions will be made on a school-by-school basis and the final say so has been delayed until May.

If Saginaw were to be shut down at the end of the school year, that decision would cause a huge ripple effect within the Valley. Scheduling would be a major issue with no one to replace the Trojans when it pertains to their league dates next season. The decision to eliminate Saginaw High, however, is still very much in the air.

Grand Blanc has expressed interest in joining the SVL and will meet with the athletic directors and principals of the other Valley schools later in the month to present their argument on why they should be accepted into the conference.

With the number of southern schools in the SVL dwindling, it would seem as if Grand Blanc would be a no-brainer. However, the only potential road block could be their enrollment. Grand Blanc has 2,626 high school students, which would be far bigger than any other school in the SVL. Flint Powers Catholic has only 647 and Flint Southwestern 567.

The Valley is no stranger to having schools of various enrollments, but the high enrollment may be a bit off-putting to certain members of the league. Lapeer would be the closest to Grand Blanc’s enrollment with 1,932. The Lightning expressed interest in joining the KLAA, but with Grand Blanc being removed due to distance, it is highly unlikely Lapeer will be accepted.

The SVL remained basically the same for about a decade until the closure of Flint Central in 2009. Ever since then, the league has seen quite a few changes. For 2012-13, the league added Davison, Carman-Ainsworth, Flushing and Flint Powers Catholic after the Big Nine fell apart. At the same time, the SVL readmitted Flint Northwestern, who left the Valley in 2002 after declining enrollment and a lack of competitiveness took its toll.

Flint Northern closed in 2013 and Flushing fled for the Flint Metro League after the 2013-14 school year. Lapeer would join in time for the 2014-15 school year after combining the former East and West high schools, and as of next year, John Glenn will be in the mix.