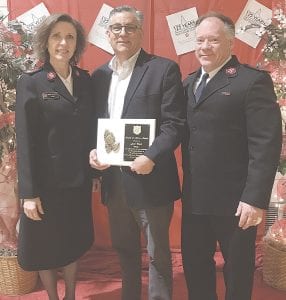 FLINT — Major Randy Hellstrom recently presented the 2018 Hands of Mercy Award to Mr. Scott Ward, currently the Chairman of The Salvation Army Advisory Board joining in 2016 and has served on the Property and Facilities Committee he also served on the 125th Anniversary Steering Committee.

The Hands of Mercy Award was established in 1964 by the Genesee County Salvation Army Advisory Board to recognize a member of the board, or a member of The Salvation Army, for outstanding service to both the Army and the community.

The award recognizes the individual representing the same goals and outreach for the community as The Salvation Army; a pioneer in civic responsibility and leadership roles and one who possesses longevity of commitment to the community, particularly youth.

In April of 2018, Ward’s family history with The Salvation Army, dating back to his grandparents, was a feature story on the cover of Fenton Neighbors, a Best Version Media Magazine, distributed to Fenton area families.

Ward is an active member and past president of the Fenton Rotary. He has been responsible for organizing the annual Veterans Day Breakfast, helps with the annual senior citizen picnic at the Lake, and has been responsible for the Co-op between Fenton Rotary and The Salvation Army picnic at the Lake for The Salvation Army summer campers. Ward looks forward to this event every year as much as the kids do!

Ward and his wife Sue, married for 44 years attend the First Presbyterian Church of Flint and he has many hobbies; but most of all enjoys time spent with his family, including three children and four grandchildren.

Ward owned and operated Ward Dental Laboratory in Brighton, MI for over 35 years where he still works part time specializing in implant and cosmetic dentistry, and consulting. He serves on the board of the VINA Dental Clinic in Brighton Michigan. The clinic helps people in need with no insurance for dental care.

He also is the Dental Technology Chair Person organizing a very worthwhile program called “Mission of Mercy” through the Michigan Dental Association to provide much needed free dental care for people all over the State of Michigan. — P.S.