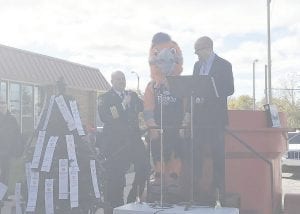 GENESEE COUNTY — It was a chilly day, but those who attended the Salvation Army 2017 Red Kettle Campaign Kickoff, held Nov. 10, the reason for gathering warmed their hearts outside the Salvation Army Genesee/Shiawassee County Regional Command

“Money raised through the campaign goes not only to help us pay for toys and food during the holidays, but also helps us help people throughout the year with shelter needs, food, clothing, water, heat and utilities,” Senn added.

Senn said the goal for the campaign this year for Genesee County is $800,000.

“We’re very confident we will reach our goal based on the generosity of those in Genesee County in the past,” he said.

Community members can donate at a red kettle at 64 different locations across Genesee County, including Walmart, Sam’s Club, Kroger and VG’s grocery stores. 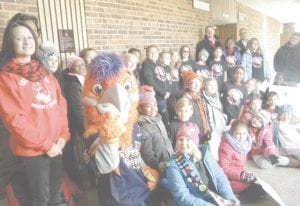 Senn also told attendees to the kickoff about the Salvation Army Angel Tree program. Through the program, community members are invited to select an angel from a tree at Genesee Valley Center. Each angel tag provides a child’s name, age, gender and wish list. The person who selects the tag then purchases the gifts for the child.

“It’s always important to bring kettle awareness at the beginning of the season,” said Scott Holman, who has played coronet with the band for over 40 years.

“It’s amazing how change in the kettles multiplies to thousands of dollars to help the Salvation Army do the most good,” Holman added.

Students from McGrath Elementary School in Grand Blanc sang “Jingle Bells,” holding up posters they made for the event. The students were named the 2017 Red Kettle Campaign ambassadors.

Erlen Beck, a teacher a McGrath, who is in charge of the student council, said by partnering with The Salvation Army they are teaching the kids to give back.

“It’s important to help others, instead of just thinking of yourself,” said Peyton Whitney, a fifth grader at McGrath, who spoke during the kickoff presentation.

“When you go to the store with your parents you say ‘I want that,’ but some people actually need stuff,” McGrath added. “For them, it’s about need, not want.”

“We really depend on the police and fire departments,” said Nina Lewis, who is on the advisory board for the Salvation Army Genesee/Shiawassee County.

“They’ve been such supporters, I don’t know what we would do without them,” Lewis added.

Deandric Humphrey, whose daughter Alexis attends McGrath, said he believes the Salvation Army will beat their goal this year, especially with all the challenges they put out at the schools to collect money there.

During 2016, The Salvation Army of Genesee County assisted over 5,000 individuals and families, providing over 6,240 items to kids ages 14 and under.

“It was a very successful kickoff,” Senn said.

For details, including information about texting to give or online giving, contact Joy Martinbianco at 810-232- 1684.