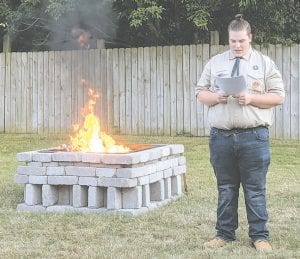 For his Eagle Scout project, Alexander Sanders assembled a team, raised money and oversaw the construction of a flag retirement pit at the Swartz Creek VFW/AMVETS Post.

Sanders is a member of Swartz Creek Boy Scout Troop 122 and a senior at Grand Blanc High School.

Upon completion of the project, Aug. 19, a flag retirement ceremony took place.

Sanders has been involved in scouting since he was 6 years old, starting as a Tiger Scout at Elms Road Elementary. He continued with Troop 122 after moving to Grand Blanc because he felt they were like family and he was committed to the troop.

Sanders comes from a family rich in scouting history. His paternal grandfather, uncle and two cousins are Eagle Scouts.

His great-grandfather, Lewis C. Stoddard, Jr., was posthumously honored at the National Headquarters in Virginia. He received the District Award of Merit and the Silver Beaver, the second highest award given nationally, second only to the Silver Antelope.

Sanders often visits the VFW post with his grandfather, and recently saw a container labeled for the collection of worn flags in the foyer.

After asking around, he realized the post did not have a fire pit and took their flags to another location for retirement.

He thanked the VFW and the American Legion Auxiliary, as well as family and friends, for their support in seeing his Eagle Scout project become reality. — L.R.