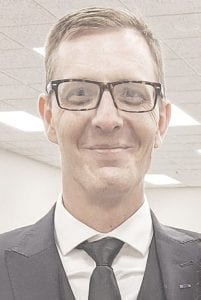 “The citizens of Genesee county deserve effective law enforcement,” said Sanford, who said he plans to deliver it using a multifaceted approach of compassion, respect, investigative efforts, and community cooperation to rebuild “respect between police and citizens.”

Sanford is a combat veteran of the United States Army. He served with the 172nd Stryker Brigade Combat Team based at Fort Wainwright, Alaska and was deployed to Mosul, Iraq in 2005.

While conducting counter insurgency operations, Sanford’s unit was involved in a battle with members of Al Qaeda in Iraq. He was severely wounded while evacuating wounded American soldiers out of a terrorist safe house under heavy enemy fire.

For his actions, Sanford was awarded the Distinguished Service, the nation’s second highest award for valor, and a Purple Heart.