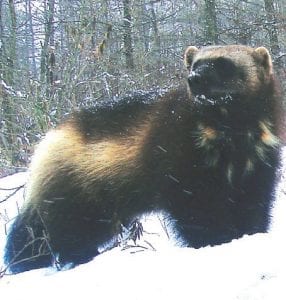 Jeff Ford captured these images of the last known wolverine found in a Minden City swamp.

The traveling exhibit, created by the Michigan Historical Center, is a state Department of Natural Resources showcase of what is believed to be the last wolverine known to live in Michigan, aka the Wolverine State, since the 1800s.

Genesee County will likely be the furthest south the exhibit will travel, said John Walker, a local historian and Courtland exhibit co-coordinator with Mona Miron, an Atherton graduate and booster, who worked for more than a year to bring the exhibit here.

Their quest began in May 2011 after a conversation at the Atherton High School Class Reunion. Both Walker and Miron began making regular phone calls to DNR Education and Outreach Manager Kevin Frailey, pleading to add Burton to the tour schedule. 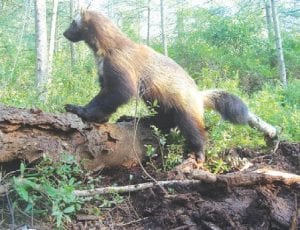 “After seeing the DNR move the wolverine around the state, I said why not Genesee County,” said Walker, who joked about calling Frailey so often, he made a nuisance of himself.

Walker finally got the green light in s surprise phone call from Frailey in December.

On a tight timeline, he and Miron went to work to arrange the Courtland Center exhibit.

“This is really a great event for us having the Atherton wolverines right here in this district and the University of Michigan wolverines here in Michigan and now actually having Pretty Girl, I believe is her name, the last known wolverine in the state of Michigan, right here in Burton at Courtland Center,” Zelenko said in her remarks at the ribbon-cutting ceremony.

She was joined by other local officials including county drain commissioner Jeff Wright, members of the Burton City Council and Parks and Recreation, the Principal of Atherton High School and also the high school’s costumed wolverine mascot.

A representative from For-Mar Nature Preserve and Arboretum was on hand with an accessible mounted Wolverine, origins unknown, and a stuffed fisher, another member of the weasel family.

Liz Shaw, co-author of the book “Lone Wolverine,” said a few words then signed copies of her book which chronicles Pretty Girl’s life as told by Jeff Ford, a science teacher and amateur naturalist who lives in Tuscola County.