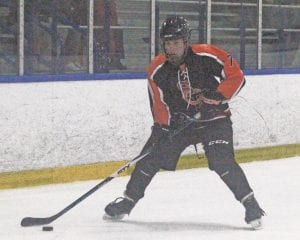 SCF’s Mitchell Carlson skates the puck in on net against United on Feb. 14.

FLINT – Swartz Creek/Clio/Flushing (6-13-1) embarks on its postseason journey in next week’s pre-regional at the Dort Federal Event Center. SCF opens against the Alliance (LakeVille/Goodrich/North Branch/Imlay City/Almont) (14-9-1) at 4:30 p.m. on Tuesday.

The winner moves on to the pre-regional final at 4:30 p.m on Thursday against the winner of Grand Blanc (7-14-1) and United (Kearsley/Brandon/Holly/Lake Fenton) (9-11), who face each other at 7 p.m. on Tuesday.

The other pre-regional is at Bay County Civic Arena in Bay City, opening with Saginaw Heritage (16-4-3) and Midland (13-11) at 7 p.m. on Monday. The winner advances to Wednesday’s pre-regional final at 7 p.m. against the Bay City Wolves (Bay City Central/Bay City Western) (16-8).

The regional final will be at 2:40 p.m. on Saturday at the Saginaw Bay Ice Arena. Saginaw Heritage is the only state-ranked team in the regional at No. 7.

Nik Calugaru, Kam Houle and Seth Crompton have been key leaders for SCF this season, but they’ve also gotten major contributions from others as well. Jake Castles and Dylan Stankewiscz have also chipped in majorly.

SCF traveled to the Polar Palace to face United (Kearsley/Brandon/Holly/ Lake Fenton) and took a 7-6 win. Jake Castles opened the scoring, assisted by Dylan Stankewiscz, before Castles scored again on a breakaway, also assisted by Stankewiscz. Castles completed the hat trick within the opening period with the help of Kam Houle.

Castles then netted his fourth of the night with the assistance of Noah Somers, followed by a Stankewiscz goal, assisted by Houle and Castles. Somers then buried one of the own, fed by Seth Crompton and Nik Calugaru, and then Castles added another from Stankewiscz and Houle.

SCF hosted Lapeer on Wednesday at Iceland Arena, following press deadlines, and is at Grand Blanc on Saturday.