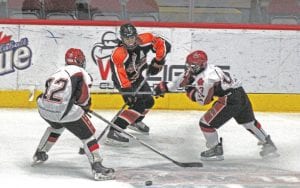 “The season overall was very successful with 15 wins and 11 losses, many of which were very close one-goal game that could have gone in our favor,” said SCF coach Ben Guzak. “We won the Flint Metro League championship and I’m very proud of our players for their work ethic all year and dedication to the team. It is our first outright championship in decades.

“I’m happy for our players, our schools and our communities.”