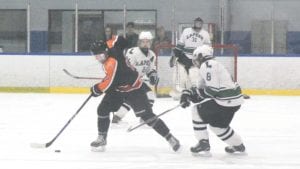 SCF’s Kam Houle skates the puck through the neutral zone against Lapeer on Nov. 29.

Kam Houle was able to light the lamp with the help of Mitch Carlson before Nik Calugaru scored SCF’s last two goals. He got helpers from Jake Castles and Dylan Stankewicz.