SCF narrowly edged out by Tri-Valley 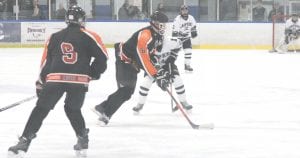 SCF’s Seth Crompton skates the puck past a Lapeer defender at the Polar Palace on Nov. 29.

FLINT TWP. – Swartz Creek/Clio/Flushing’s varsity hockey team lost Saturday’s game at Iceland Arena 6-5 in a game that was truly up and down.

Dylan Stankewicz was the first to score for SCF on a feed from Kam Houle, which was followed up with a Seth Crompton tally, assisted by Stankewicz and Jake Castles.

Castles got back into the assist column when he helped Brendan Ogle register his first goal of the night before Mitch Carlson buried one, assisted by Stankewicz and Houle. The final SCF goal of the night came from Ogle with a helper from Stankewicz.